Every once in a while a revolutionary product comes along that changes everything.

Steve Jobs, on introducing the iPhone

Turns out that every 50 years or so, a disruptive new technology emerges and greatly influences our society. It improves our lives, shuffles the rich lists and throws the economy into the booming phase of a fresh new Kondratieff cycle.

Just like a colony of microorganisms, these cycles sprout off of a breakthrough in science which opens new doors in the realm of technology slowly gather momentum, exponentiates in adoption, reaches a pinnacle and finally, instead of withering away, gets taken for granted and therefore disappears from headlines.

It all started about 250 years back, a couple of decades before the nineteenth century with the invention of the steam engine. It gave rise to the development of mechanised mills and looms such as the Jacquard’s loom (1804) that reinvented the textile industry. Richest people of those times were merchants trading clothes or the businessmen owning mills.

About 50 years hence, the steel industry started to flourish. Coupled with steam engines the railroad industry rose to prominence and mass transport sore in popularity. With this revolution, the new world (North America) raced forwards to become an economic powerhouse overshadowing Europe. Billionaires such as Andrew Carnegie made fortunes by being a tycoon in the American steel industry, despite coming from, almost fittingly, a Scottish family of handloom weavers.

Roll 50 more years forwards to the end of the nineteenth century and you would witness the rise of consumerism. Classical Physics was having its conclusions written and a world blissfully unaware of both the quantum domain and the expanding Universe toyed with the newly discovered electricity from Physics and organic compounds (plastics) from Chemistry. Every new invention was getting was deriving its power from electricity and the neighbourhoods were getting connected by power lines. This was the era of Edison and Tesla and much of today’s world is shaped by the inventions of this time. Radio, light bulb, electric machines, plastics, etc. were populating the world and we were starting to discover that we desired things we didn’t really need!

You like fast cars? You gotta thank the 4th cycle. Starting just before the great depression and enduring on was the revolution in the petroleum and the automobile industry. From uneven roads of horse trails and horse dumps, we evolved into modern roads with tyre tracks and oil stains. Whereas the second cycle solved the translocation for the industries, the fourth cycle solved transportation for the individuals. Rich lists were topped by Ford and owning a car became a necessity rather than a luxury.

Any guesses what this one would be? Here’s a hint. You are reading this article because of this revolution. That’s right, we’re talking about the revolution in information technology. With the invention of the IBM microchip in 1970 the IT industry, that was kicked off by Turing and Shannon’s brilliance in the 40s, sprang to life. Within 20 years the internet was discovered. And 10 years later at the turn of the new century were born many of the companies that would dominate the tech industry at the present (such as Google and Amazon). Data became the new oil. There’s no surprise that most of the Billionaires in today’s world are the Internet Moguls. 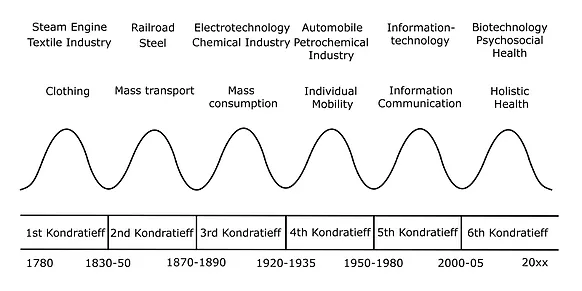 Analysing the stock prices in the USA’s S&P500 each cycle can roughly be divided into four parts. Although these are massive generalisations, they do bring out some parallelism between technology revolutions and the evolution of a colony in an ecosystem with limited resources. Analysing these metaphors, therefore, become oddly satisfying!

When a new technology is invented, the early adopters are nothing short of being a contemporary Columbus. They create the earliest use cases of the technology and help spread the initial word and spark the initial fire. Fearless investors pour their fortune into this new pot expecting returns in the future. Headlines start to appear proclaiming this new technology to solve every conceivable problem. Sooner than not, our expectations from the technology overshoot its capability to deliver.

In spring, amateurs and professionals are virtually indistinguishable. As summer approaches, the professionals sore ahead. Huge companies start to rise into prominence and the interest in investing in the sector of this innovation skyrockets. The innovation serves the developed countries first and gradually starts to spread as the price of adoption begins to plummet. This phase sees the conversion of luxuries into utilities.

Sort of like the middle ages in Shakespear’s Seven Ages, the industry matures in this phase. The influx of investment slows down. Technology witnesses wider adoption. It starts to benefit the masses. In the end, the market corrects itself (as seen in the bursting of the dot-com bubble) and the technological boom begins its fall.

Winter is always coming. No technology, howsoever revolutionary now, would be taken for granted sufficiently into the future. The hype eventually dies. Newer contemporaries eventually outpace the old. Magic, once you know the secret of, fails to entertain. But technology rarely evaporates. It matures into sectors upon whose shoulders newer technologies develop. Without the transportation industry, the giants of IT would have had a hard time developing quality hardware. Similarly, without the level of communication, we have achieved today, building future innovations would have been simply unimaginable.

There’s a lot of speculation about what this cycle would be about. The image above hails holistic health as the one. Other estimations focus more on virtual and augmented reality, while some consider the revolution in the financial industry (with Paypal, bitcoin and stripe) to comprise the sixth Kondratiev cycle. However, there’s no doubt that we’re currently inhabiting the end of the 5th cycle. Though the sparks for the 6th cycle seems to be kinda overdue, given that most revolutions begin after depression, the chance that we might be entering a world full of possibility right after this pandemic leaves us hopeful.

connect on linkedin
mail me

Checkout the latest book at 3am Store